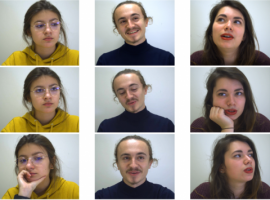 For each subject, following data is contained into a folder named "s+subject_number" (subject_number ranges from 1 to 56),

Subject information
A file named "info_s+subject_number.txt" indicates the participant’s gender (m for males and f for females), the experience scenario assigned to the participant (test or ctrl), the date the experience took place (respecting the ISO 8601 format, i.e. YYYY-MM-DD; Y refers to the year, M to the month and D to the day of the experience) and the time it started (following the 24-hour timekeeping system: hh-mm-ss; h refers to hours, m to minutes and s to seconds).

Video recordings
Three video files give video recordings of the participants during the three tasks. Video files are named as follows: "vid_s+subject_number_T1/T2/T3.avi".

Self-reported anxiety scores
A file named "selfReportedAnx_s+subject_number.csv" contains self-reported cognitive anxiety, somatic anxiety and self-confidence scores computed at the beginning (pre_experience) and at the end (post_experience) of the experiment. These scores are presented as a matrix with the following order: